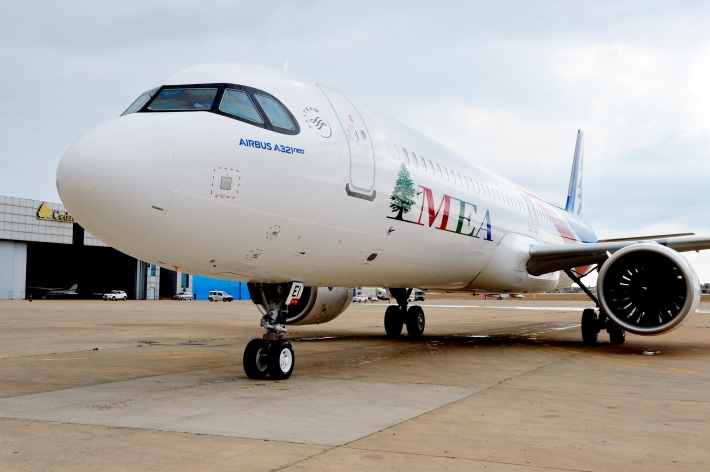 MEA doesn’t often feature on TheDesignAir, as it has slipped under the radar for a while with its older fleet and less-than-design approach to aviation. However it seems the airline has turned a corner and is featuring firmly on our radar now. While not as ‘bells and whistles’ as many other Middle Eastern carriers, it has certainly grown up with the first of its ten A321neos featuring a modernised livery and smart interior brought to life by Beirut based Joe Farah Design Studio. 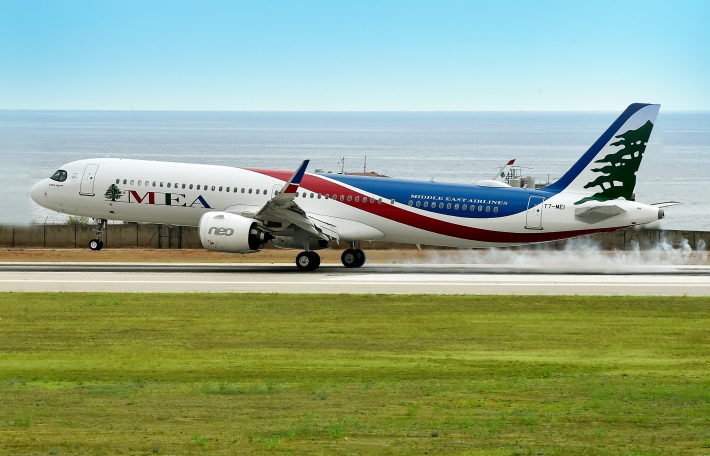 The livery is fresh, and better balanced, with the blue coloured swash elongating and ‘weighting’ the plane, creating a dynamic fluid image. The use of red green and blue, being the core additive colour model of light is a difficult palette to master. After all, these basic colours reflect a child like quality, and somehow remind me of a Sony Triniton Anode TV logo from my childhood. 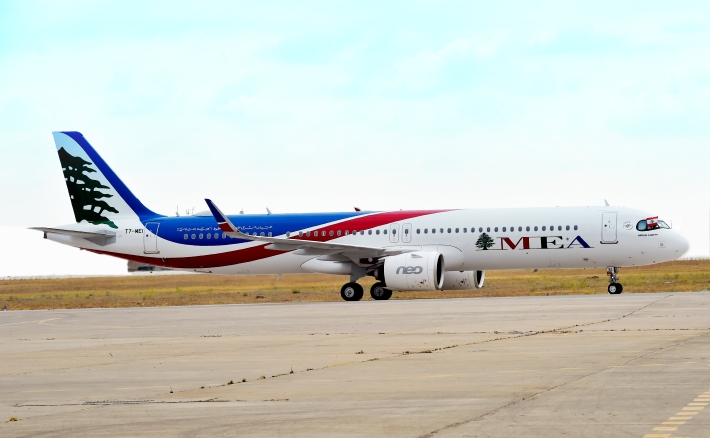 However the matured use and dulling of the green Cedar tree logo mature the design and both the sharklets and raccoon mask on the cockpit complete the design with needed design details to balance the front half of the aircraft which is mainly white. We like the fact the Cedar tree has been both simplified and made abstract on the tail by just featuring part of it. It has a better visual balance for the livery, although interesting to see the MEA logo still features the more detailed tree showing the airline isn’t rebranding entirely, instead it has opted to purely reflect the Lebanese flag detail on the tail. 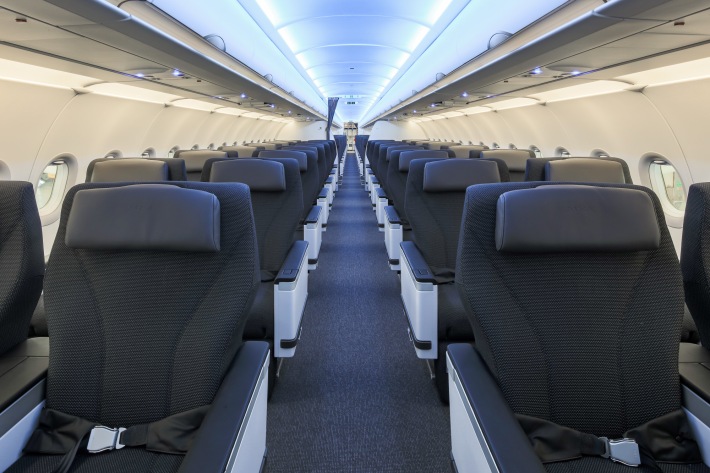 While the outside is bright and bold, the interior couldn’t be more different. Brought to life by working with studio Joe Farah, famous Lebanese Interior designer, the airline has a smart, professional cabin which is designed to mean business. 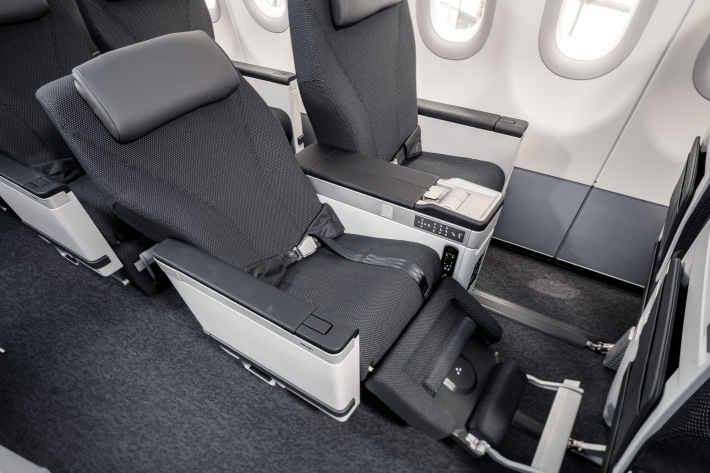 And ‘business’ is the operative word with no less than seven rows of Recaro CL5710 seats in a 2 x 2 configuration on the A321 which means that 28 business class seats in the front, virtually extending all the way to the over-wing exits (bar two rows of economy seats). 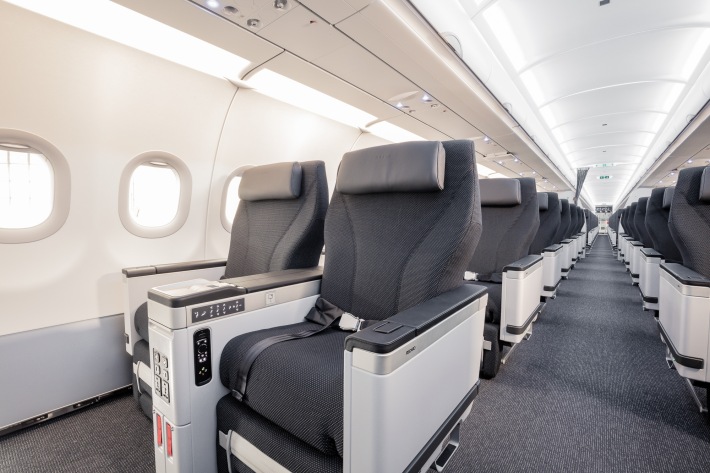 The business class seats feature a slate grey simple textured fabric, which work in conjunction with the carpet textures and smooth grey leather headrests embossed with the MEA logo. The seat controls are nicely designed, clean and match the general design of the cabin, however these seats do feature the IFE controller right next to the knee, which we have knocked several times in the past making for watching IFE a little more challenging. However, that said, we do find these seats incredibly comfortable thanks to the deep padding they offer. 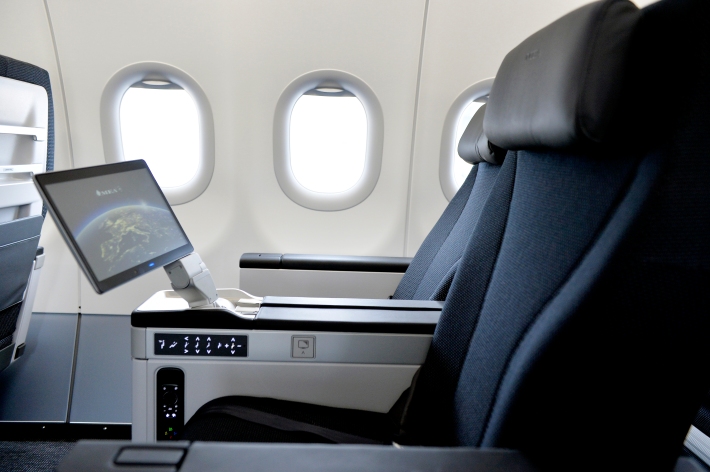 In economy, like many airlines, the airline and design studio have opted for a complimentary design palette, albeit with differing textures and patterns. 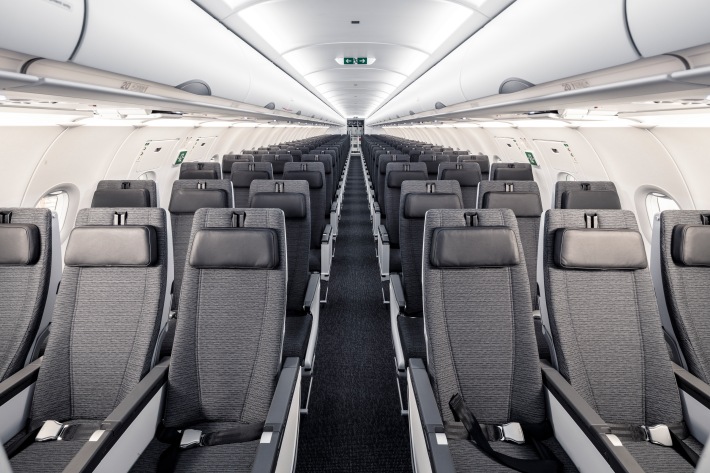 In economy, the seats offer a deeper, more complex weave pattern which allows for greater wear and tear while still offering a smart, sophisticated cabin concept. 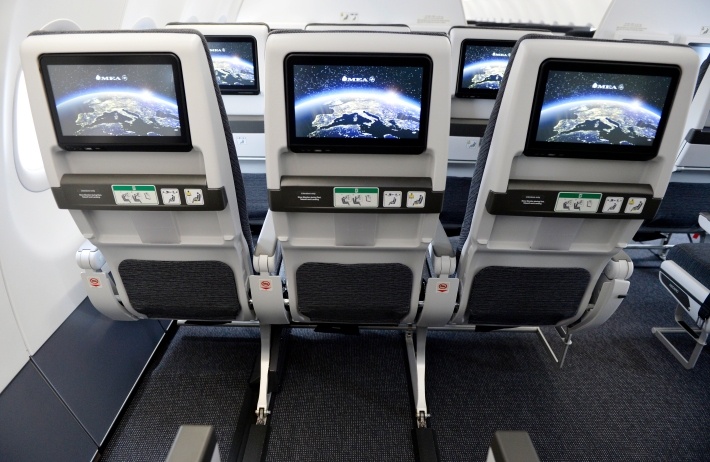 On the reverse of the seat, there is a large TV screen allowing for touchscreen entertainment as well as a bi-fold table, common to the Recaro CL3710.

Overall, this cabin product, while sadly lacking some of the colour and vibrance of its ornate cultural roots, certainly positions the carrier as an internationally acceptable cabin product. 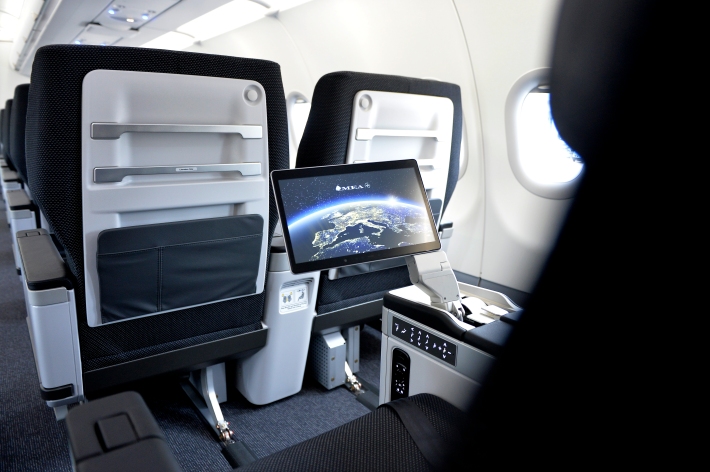 Hopefully this new cabin design and approach will lend itself to the new A330-900 neos that were (and maybe still are) scheduled to join the carrier next year. Although we hope the four A321 XLR’s that will feature a better flat-bed business class product for those longer-haul single aisle routes that the aircraft is designed to fly.